Good can come out of what seems a very light-hearted practice – taking of selfies.

In fact, seven identifiable legitimate business uses that exclude bragging to the office about your cool trip to Paris. Here they are in no particular order because, after all, this is about selfies.

1. Prove your identity to access your computer accounts. This necessitates a computer with a camera – more and more the rule rather than the exception. Either a built-in – as you’ll find on most current laptops, notebooks, and tablets – or as an add-on for your desktop computer. Logitech has a great HD camera for $40.

2. Overcoming Security Problems. What if a thief has a picture of you? Part of the security transaction might be a gesture captured with video. Or after the selfie, a fingerprint as a secondary authentication as MasterCard does.  MasterCard plans to add heartbeat recognition. Yes. You still have to enter the credit card info!

3. Google Is In the Store. Google is coming up with a way to use facial recognition and a secondary proof that you are in the store. Now I hope you were paying attention, because Google doesn’t have a “store.” Not the brick-and-mortar kind that you can be “in.” But Google plays well with all and offers the technology to those who search and find on Google (of course). So you take the facial recognition selfie with a pre-determined store object.

4. Amazon Selfie-Pay Patent. Amazon has filed for a patent to enable users to pay by selfie. A specific action – hand gesture or left-eye blink, for example, confirm the transaction. Future capacity would be a heat sensing device as secondary authentication. Filing for a patent shows serious intent. It also indicates that Amazon is probably close to making this happen.

5. Matching driver photos at Uber. Uber already uses a photo of the car license plate. They will be instituting a routine real-time photo of the driver which compares to the previously scheduled selfie. If they don’t match up, the account is blocked. So you know your driver is who he says he is. Comforting on a cold winter’s night. Uber is using Microsoft’s Cognitive Services.

7. SelfieJobs Recruting Tool. SelfieJobs uses video selfies to recruit younger sales staff. Rather than reading resumes this tool provides ability to judge candidates through social media. As a crusty old BabyBoomer, I’m wondering if this is discrimination. But then, maybe the high-intensity demands of sales requires people who can move quickly. On a regular basis. “You go, Millennials!” Oh yes. There is the possibility that the key word was “social media.” Because only the young are tho 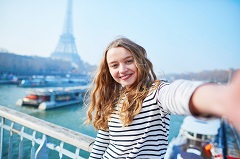 roughly competent in this skill.

There are other futuristic technologies available now. But available only on relatively uncommon devices – super-computers. Still we delivered 7 very legitimate business uses of the selfie. Admittedly the Google, Amazon and Uber type may not be applicable to you. Still… you can enjoy the progress. And that trip to Paris!