Walter Isaacson, a LinkedIN Influencer, says, “The Internet is broken. Starting from scratch, here’s how I’d fix it.” The article was featured in: Best Advice, Big Ideas & Innovation, Editor’s Picks, Media, Social Media, and Technology – showing an extensive interest in this admittedly abstract and complex idea. 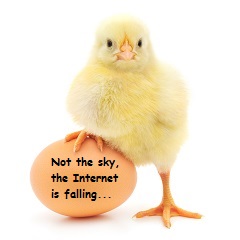 This is not a complaint about slow response time from lack of bandwidth or your favorite site being temporarily down. This is the recognition that things like RansomWare, hacking the DNC, the banks, the government, and so many  other unpleasant security risk events, have created a corrupted or broken Internet.

Where did it all come from ?

People, of course. People who have taken the openness of the Internet and misused it. People who have abused the concept of privacy by seeking to turn it into anonymity. The perversion of privacy into anonymity is the main cause of the corruption that has infested the Internet. We may not care that content goes unrewarded (financially). But we do care greatly that there are a hoard of people who misuse their anonymity to harass and defraud the users of content.

The problem is somewhat complicated. Information (content) travels the Internet in small packets. The problem centers on a one-way directional system that identifies the destination of an information packet but not its origin. This protects those at the origin, creating the desired anonymity of the nefarious while destroying the privacy of the innocent.

Changing the broken system is evidently not possible because it already exists and because the vast majority do not consider the system broken. Providing an alternate system, to be used voluntarily, would eventually create a system preferred that would make obsolete the corrupted.

Change is difficult even at the smallest levels. How complex to change a system that that involves 3.5 billion people around the world and growing at the rate of over 235 million per year – eight new users per second. However, Howard Shrobe, the director of cybersecurity at MIT said, “We don’t need to live in cyber hell.” There are plans to make changes.

The solution offered by Walter Isaacson is a voluntary system that reward content producers through identification of the origin of what each user sees. Email protected by an authenticating originating address. Security that is built into the base line hardware – servers and workstations. Chips and machines “tagged with meta data that describe what they contain and give the rules for how it can be used.”

If the voluntary system worked the benefits might be an “easy and secure way to deal with your finances and medical records.” With all the financial hacks that have taken place both in banking and retail realms, it is very attractive to think of the possibility of real security. And to fear the potential of even the voluntary site being hacked. One commentor’s remark, “What’s new chicken little?” shows the disdain for a good idea and perhaps also the scepticism that such an idea would do any good.

Isaacson relates the tale of the Ring of Gyges from Plato’s Republic. If you have the ring and put it on, you are invisible and anonymous. Plato asks “whether those who put on the ring will be civil and moral” and determines that they will not.

Isaacson sees this as proof that the Internet’s anonymity appeals to the incivility and immorality of its users. But who’s to say that even a voluntary system of control might not appeal to the same base character in humanity? Such a system of control would appeal to the elite who would run the system, who would eventually – through the need to maintain private security – come to have an absolute control over those who “volunteered” to become a part. Absolute power corrupts absolutely.