What is the test of loyalty? 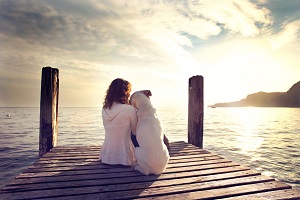 My mom saved green stamps. That was a long time ago, so I was just a kid. But I got it. When she made a purchase, she was rewarded with sheets of stamps. She pasted these in a book and when she had sufficient number of books, she turned them in for a nice toaster. Or some other kitchen appliance.

Yes, I know. Green stamps are dated. In fact, I went to look for a picture of “green stamps,” and all I came up with were markers about being eco-friendly. Green. Of course! I settled for a girl and her dog. Subtle. But lots of loyalty!

Did you know that customer loyalty programs have been around for over 200 years? They were called “premium marketing” programs. For example, American retailers in the 18th century gave copper tokens to be redeemed on future purchases. The stamps came in around 1891.

The best known stamp program was the S&H Green Stamp program which my mom was a part of. S&H was so popular they issued three times as many stamps as the USPS and in 1964 S&H was the largest purchaser of consumer products in the world. Amazing customer loyalty program!

I don’t think people were any more loyal then than they are now. But some things have changed. We’ve moved from toasters to airplane miles. And coupons. And discounts. Oh yes. And free shipping! Thank you Amazon.

One current survey noted that 26% of companies surveyed had no formal program to encourage customer loyalty. However, many of them used informal means, which can be inconsistent at best. And insufficient at worst.

Businesses need to think about what they are doing to encourage customer loyalty. Two good reasons?

Customer loyalty programs pay for themselves. Think about the meaning of these two statistics.

What can we learn from such strong responses in two different directions? Smart businesses acknowledge the reality of the strong presence of loyal customers. Customers actually want to be loyal. They are simply looking for a business they can trust.

Alliant would be interested in knowing about your customer loyalty program. Write and tell us!