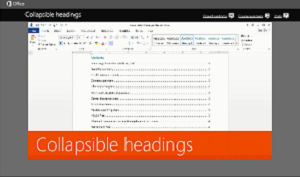 Microsoft has a short video which explain how to make collapsible headings in Word with pictures. Very helpful. Or you can follow these steps below.

It is important to understand that the collapsible headings function is only available for those headings that are specifically indicated as “Heading.” Collapsible Headings are a part of the outline function.

Try it! Highlight your heading; then roll your mouse pointer over the various headings listed. You’ll be able to see the differences in headings as you change the heading you mouse over.

Some of the headings not attached to the outline function can be modified to make it part of the collapsible headings group.

To do this you would right click on the heading and select Modify. In the dialogue box there are various choices.

The collapsible headings can be used as a table of contents when all items are collapsed. To collapse all headings, highlight and right-click on a heading. Find the menu item in the drop-down, Expand/Collapse. Choose either Expand all or Collapse all.

If you highlight the items to be collapsed, you can open the Paragraph dialogue and select Collapsed by Default so that the document opens with just the headings showing.

Each section can be expanded or collapsed as needed by rolling the mouse over the beginning of the heading to bring out the collapsing/expanding triangle. Sections collapsed will not print (except for the heading). This allows you to print headings only as a convenient table of contents.

The Collapsible Headings Word 2013 is a helpful tool for navigating through a lengthy document or for visualizing the full contents of a document in one short listing.