Word 2013 has many pluses balancing a few minuses

Sometimes Microsoft will remove a feature in their version update. Or, in making improvements, they will present most of the old feature, but leave out the very part you feel (now) you need the most! That may be the case in Word 2013 with MDI, or multiple document interface, not a part of Word 2013. In Word 2003, 2007 and 2010, when you opened multiple documents, by default Word functioned in a single document interface (SDI). In this case, each document gets its own set of menus or ribbons and behaves as a completely separate window. Which is exactly the way Word 2013 works by default. 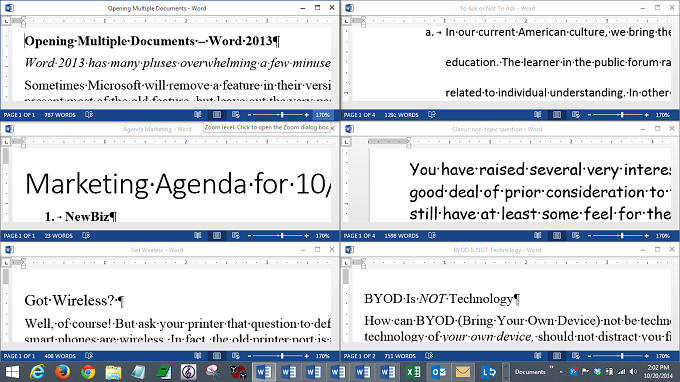 Well, what’s the difference?! The difference is that in the previous versions you had the option to either be in MDI or SDI phase. If you have one of the earlier versions look for the option “Windows in Taskbar” or “Show all windows in taskbar” and see if it is checked, indicating the default. Uncheck to access the MDI function.

Evidently, Microsoft gained information about those using the MDI function and felt warranted in dropping the MDI feature. Maybe you always used the default and have no idea! The MDI allowed for the arrangement of over 3 windows in a cascading or tiling arrangement with one set of menus for all windows.

The first option in the Word 2013 View tab is called New Window. This is quite convenient, although generally meant for a new window of only one document. The idea is to have two separate windows that allow you to look at two places in the same document. You can do much the same thing with the Split function – the third option under the View menu – except that the split is horizontal and not as flexible as making two (or three) windows of the same document.

The second item on the Office 2013 View Menu is Arrange All. This option mimics the old MDI function by placing each Word document that you have open in Tiled arrangement. Cascading is not available. I opened nine documents and got three rows of three documents with very small type, mostly readable, and the ability to edit in each one. You can copy and paste with highlighting and right clicking to gain the context menu. Having said that, it is necessary to observe that the Ribbon is gone from all documents so that menu use is limited. Multiple key-stroke patterns do not work (Alt+ O + F to access Font). But most single key-strokes do work (Ctrl+F to find).

After the Split function (see above) is the View Side by Side feature on the Office 2013 Ribbon under the View tab. This is very useful with both documents in vertical format. You can also select (or deselect) to have the scrolling to be synchronized (right to left and up and down) between both documents. An innovative use of the Side by Side feature is to use it in conjunction with the New Window feature. In this way, you have two views of the same document scrolling along as you make edits. Be sure to deselect the Synchronous Scrolling feature. In fact, I discovered that several of the features could be used in conjunction with others. Endless possibilities!

By the way, if you lose track of where a particular document is in the tiles of your window you can use the Switch Windows function which lists each document by title and allows you to go directly to the document of choice. You can also restore a particular window to full size and then use the Reset Window Position function to neatly reorder all documents. Almost unbreakable!

So you give a little and you take a little. I don’t fault Microsoft for dropping a function that the majority of users did not think to benefit from. Much like Costco taking non-selling items out of their inventory or even the local restaurant dropping off the menu an item no one is ordering. Imagine my disappointment when I discovered that PF Chang’s had dropped their scallop dish! I was “forced” to order the Salmon. At least Microsoft has provided a multiplicity of functions to replace what they removed. Very creative! Give it a try. It will benefit your ability to compare documents. Without printing.