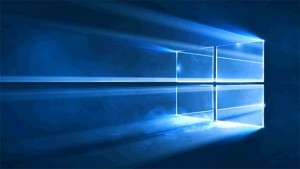 Who are the early adopters? The strongest group to adopt the new OS were Windows 8.1 users, followed by Windows 7 and Windows 8, in that order.

In real numbers, Microsoft tells us that a month after the upgraded operating system had been released Windows 10 had been installed on 75 million devices – an average of 2.5 million a day, which qualifies as a pretty eager rate of adoption.

Significantly, only 1.5 million machines are running Windows 10 Enterprise. Big corporation sales are a big part of Microsoft revenue and the publically traded company is eager to win over corporate clients who largely ignored Windows 8.

Microsoft’s new web browser, Edge, has yet to take hold with those who have migrated to other browser software. Global usage for Edge, which comes with Windows 10, peaked at 20 percent just after the global launch of the new OS. Usage fell back to 14 percent a month later on August 31st. Evidently, after giving Edge a try, users preferred their familiar browsers, Chrome or Firefox.

The number of computers using Windows world-wide is 1.5 billion. Windows 7 has 48% share of that, while Windows 10 currently is at 5%. However, the first month of availability for Windows 7 saw only a 4% adoption, so the numbers are definitely favoring the new OS.

Windows 7 is operating on 48 percent of the world’s PCs, with 40 percent of the PCs in the U.S. using Windows 7. Microsoft says more than 1.5 billion computers are using Windows. Windows 8? One month out, 1% adoption. Numbers really do demonstrate a segment of reality.

One key advantage for Windows 10 is that it has been offered totally free for all Windows 7 and Windows 8 users. The only cost is the time and disk space for the install. Another factor in early adoption is an evident change in Microsoft’s attitude. Where with the earlier versions there was a greater tendency toward an assumption that the vast majority of computer users would simply make the change as corporately anticipated, this time around Microsoft is making a strong push for users to upgrade.

Perhaps a recognition that other choices exist and that users cannot be ignored in the equation. Microsoft is perhaps admitting that Windows 8 was an OS that caused a good deal of frustration among longtime/loyal Windows users. We should read the efforts toward Windows 10 as a recognition that even the mighty cannot continue without customer satisfaction.

Conclusion? “Now it seems that Microsoft has really hit the sweet spot by building an operating system that will work well for people who use a keyboard and mouse but that also offers the kind of flexibility Windows 8 wanted to offer as a tablet OS.” A return to the strength of Windows 7, but with significant advancement. There’s a green light for upgrading.